Lot's of the white stuff!!! 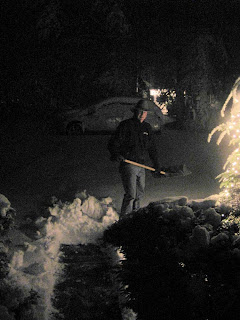 I went outside last night during the storm to take these pics. I had intended to post them right away....but as luck would have it, before I could get the post up online....the power went out. DANG....I hate when that happens. I was afraid to turn the computer on again after that for fear that it would keep going on and off....which the power did! Sooo...I went to bed instead...lol
The pics are even nicer to look at if you click on 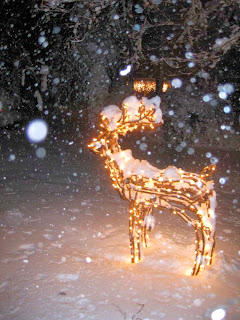 them to enlarge them. The last pics I'd taken were of my back yard. I took the front this time.
The first one is a shot of my husband after he'd shoveled just enough of the walk to actually get out of the breezeway and into the front.
The next is of the lighted deer out front. He was actually the reason we went out in the first place. The large tree near him had gotten some very heavy branches and were threatening to knock him out. 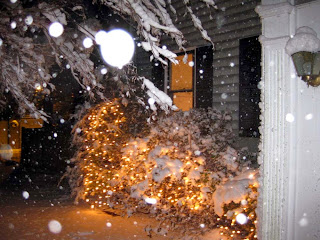 The next pic is a shot of some of the lights in the front of the house. I love the way the lights shine through the snow.
The next one is of the gazebo further up front in the yard. It looked so beautiful with the lights shining through the huge pine branches. 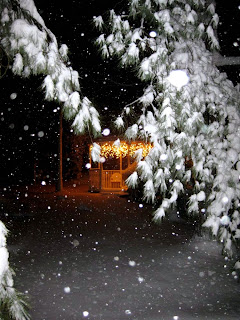 The last pic is one that I took as I was coming back into the breezeway. I just stopped in my tracks. I think that this is just sooo pretty.
We have a small lighted tree in the breezeway and the glow from the tree onto the panes of glass on the window and door to the back yard looked so lovely with all the snow on them.
I'm thinking that this may be a shot for making my Christmas cards for next year.
Well....I can hear my dear hubby out there with 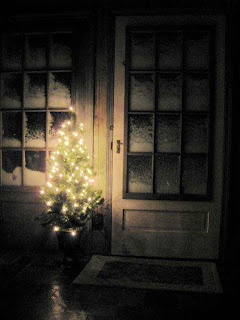 the snowblower right now. Guess I'll go out and help for a while......at least brush off the cars!!

the snow always looks prettier at someone else's house!

OOoo - how pretty! Love those lights too.

oo beautiful!! I especially love the tree in the breezway picture :)