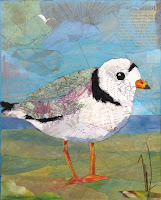 Every once in a while I manage a bit of time to play with something else I enjoy...beads!! 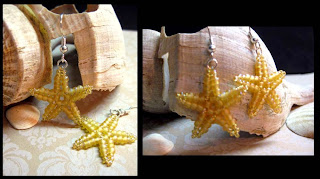 Yes...I'm still working on my Torn Paper Paintings, in face I've got several new ones in the works right now...but with the winter starting to come in here in New England, the galleries start to slow down...so I get a bit more free time.
I found a few patterns for some beadwork I had been wanting to try. The first was for little beaded "starfish". I thought they might make some really cute earrings!! I've now tried them with a variation of bead sizes and colors....so cute.

The latest piece I made was a bracelet that, while I thought the pattern was adorable, I decided to alter it a bit changing the count of some beads and sizes of others and I think it's got a great deco look...especially with this color combo!! My favorite at this point.
I know I won't get too much more time to play with these because I still have my art to work on...not to mention another trip to Paris coming up again this winter, along with the holiday season (yes...it comes on quickly)....but it's a nice little break from norm.
Posted by WW at 5:25 PM 1 comment:

Spent this week on a "mini" marathon. 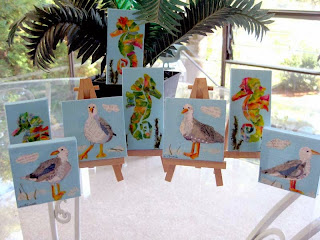 No...not a quick run aound the block...a marathon of making little "mini canvases".
Since all the tiny art that was out in the gallery with their larger counterparts have sold out, it was time to stock up again.
This year, along with the seagulls...I've added little seahorses.
They make darling little holiday gifts when you want to give that something special but a big piece is just too much. The seahorses are 2"x 4" and the seagulls are 3"x 3".
I'm sending this little batch off to The Little Beach Gallery today then making a backup group.
I just love these tiny little canvases!!
Posted by WW at 10:50 AM 1 comment: