Thought I'd share some of the holiday ligts from Paris. I have to say that I was pleasantly surprised to see that Christmas is not as retail hyped there as it seems to be here. While there were lovely light displays here and there, the season was far more low key than here. We seem to be much more "in your face" about it.
That said....here's some pretty lights....including one video...because I LOVED the way these lights "moved".

Paris offered much in the way of beautiful colors!! The most colorful of these were their cookies...macarons!! 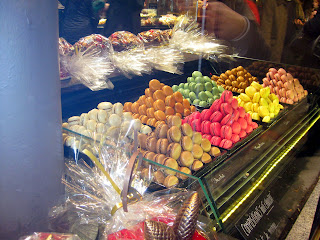 Aside from being yummy.....they were a feast for the eyes! Beautiful just to look at. 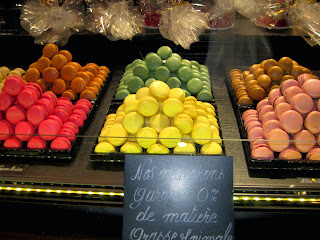 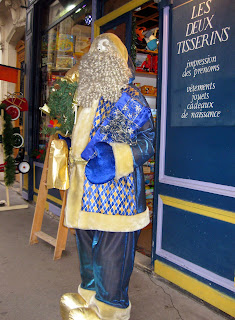 One other bit of unexpected color I discovered was Santa....wearing beautiful "blue & gold".
Posted by WW at 12:50 PM 2 comments:

I returned home just last night from a most amazing trip...to Paris!!!
This came about mainly due to my husbands job. The company was to send him as a reward for his work...and I was, happily, given the trip to join him as well. He's a yacht broker and the main boat he sells is built there in France. So, he got to tour the companies factories as well as attend the huge Paris boat show.
In the week long schedule we were given they made sure to allow for plenty of free sightseeing time....which we took full advantage of!! We got to see more than I ever imagined in that week, even with having two of the days in France spent out on the coast.

One of the biggest highlights was getting to see the Eiffel Tower! Let me tell you...it is more amazing in person than you can even imagine. I was totally awestruck by this breathtaking vision!
Once every hour, on the hour, the tower sparkles in a showstopping light show. This took place just as we arrived. So...as the first thing I want to share with you from my pics on this trip, it's the video I shot as the light show began. A moment I won't soon forget.
Posted by WW at 10:07 PM 5 comments: