Wanted to take a moment to dedicate this post to my father-in-law...Charles!! 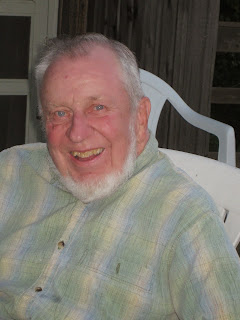 Sadly he passed away yesterday at the age of 81. It was a very peaceful passing which was a blessing.
Chas graduated from Brown University class of 1951.  He served in the United States Navy as a Lieutenant on the USS Fletcher DDE 445.   He graduated from Harvard Law School.  His legal career included private practice at a very large local firm from 1959 to 1989 with a brief interval as Assistant Attorney General of Rhode Island in charge of the civil division.
Later, he maintained a small private practice until he retired in 2000.   He worked primarily as an Estate Attorney but was most proud of his pro bono work with the American Civil Liberties Union, defending such rights as pro-choice, Indian land rights, fair housing, police harassment.
He served on many boards including incorporating Hospice Care of Rhode Island, which as it turns out, were the wonderful people to make him comfortable in his final days. The director even came to see him that last day to express their graditude for the part he played for them.
Are we all proud of him...you bet!
Posted by WW at 10:33 PM 5 comments: 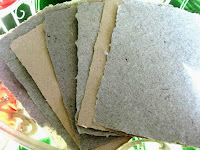 Ahhh...and you thought seagulls were just those funny little ocean birds who flew into the picture looking around for everything and anything you may have left around!!
Nope...it's not that easy.
I've had a bit of a run on seagulls lately so I had to actually make some more "seagull" papers before I could even make more of those little birds.
The best papers in the shades of gray that I'd been working with were the ones I make myself. Sooo...that was the first part of the process. 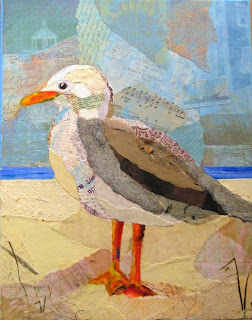 Yes...they sort of name themselves as they come to life. 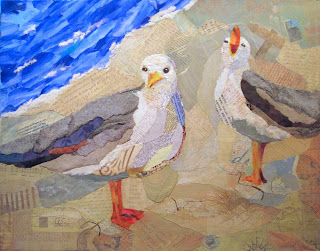 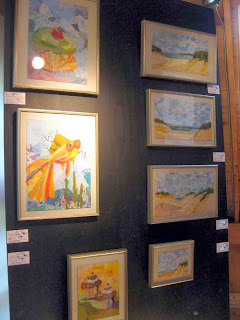 I payed a visit to my newest gallery last weekend in Bristol, RI.... the Uncommon Art Gallery.
The last time I'd been there was when I had dropped off 10 pieces for them....so I hadn't gotten to see everything up on display. Needed to get a pic of that!!
Most of the fine arts are on the second level.....so that's where seven of the framed pieces are. Downstairs there are three more....canvas beachscapes.
This is such a lovely place. While many folks go to the Bristol Art Gallery or the Hope Gallery because they are in the actual center of Hope Street..... believe me....it's well worth taking a walk a little further down the street to see what's there as well.
You wouldn't want to miss out on some truely "uncommon" art!!! 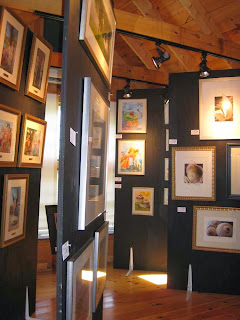 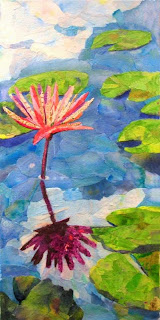 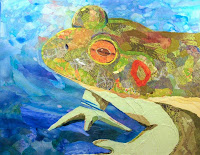 Just finished dropping off some new work at The Little Beach Gallery in Hyannis. They have been having a great summer there and sold 4 pieces of mine in one day last week.
Because of that....I needed to get the newest pieces I'd been working on down to them to fill that wall.
These are two of the newest that made the trip down today. Bill...the frog, and a pink lotus.
Loved working on both of these.
Posted by WW at 5:27 PM 1 comment: